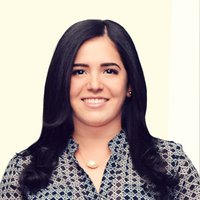 Pop-up shops are becoming the hot approach in every industry creating a sense of urgency and buzz.

It's not a new concept but it is thriving and catching the attention of consumers.

Across every industry, a new trend has popped up. The pop-up shop is helping to revitalize retail and generate both buzz and foot traffic. The pop-up shop concept first came onto the scene in 2004, with memorable versions like the Isaac Mizrahi store-in-store shops within Target. Now in 2016, the concept has grown to $10 billion in sales according to Retail TouchPoints and has expanded into many different formats. Today’s pop-up models include: traditional brick-and-mortar, store-within-a-store, standalone kiosks, and even motorized vehicles.

The rising popularity of these shops is the result of the ever-evolving behaviors of consumers and the need for retail to reconnect with those consumers in a physical location. Competition from online shopping and largely predictable retail experiences have left a bland taste in consumers’ mouths. Today brands are looking for a way to infuse some excitement back into the shopping environment.

One instrumental element to the success of the pop-up shop concept is the sense of urgency that comes from a built-in deadline; people want to catch it before it’s gone, which drives a concentration of foot traffic for brands. Additional benefits to brands include significantly decreased infrastructure costs from mobility within the concept, and reduction of inventory costs with integrated technology, ecommerce and a smaller physical footprint. Pop-up shops function as a way for brands to launch new products in an exciting, interactive way.

With versions of the pop-up concept having been around for over a decade now, the concept itself is no longer new or novel. But the innovation within the pop-up concept keeps things fresh in this evolving landscape. For example, a brick-and-mortar store in the Soho section of New York City called STORY has caught a lot of people’s attention since opening in 2011:

“The concept is revolutionary– Story is at once a retail store and a media channel.” – Huffington Post

“While the bulk of retail innovation is happening in the digital space, Ms. Shechtman [founder of STORY], a fourth-generation retailer and former consultant to Toms Shoes and Kraft, is one of a select few bringing radical revolution to the brick-and-mortar realm.” – Ad Age

So what is the story with STORY? What’s all the rage?  STORY’s concept includes a magazine point-of-view which changes like a gallery and sells things like a store. In this pop-up shop concept, the location of the shop does not change, however the physical space does. In fact, the shop gets completely reinvented every 4-8 weeks, all the way from design to merchandise. STORY’s brand is focused on bringing to light a new theme, trend or issue with every reinvention. Below are STORY’s description of their concepts and the thinking behind them:

Joining Made Movement on the road to find inspiring examples of craftsmanship and quality from the good ole’ U.S. of A. Along the way, meeting denim makers from the Motor City and sartorially-minded surfers from California and introducing them in a concept that plotted a cross country course. 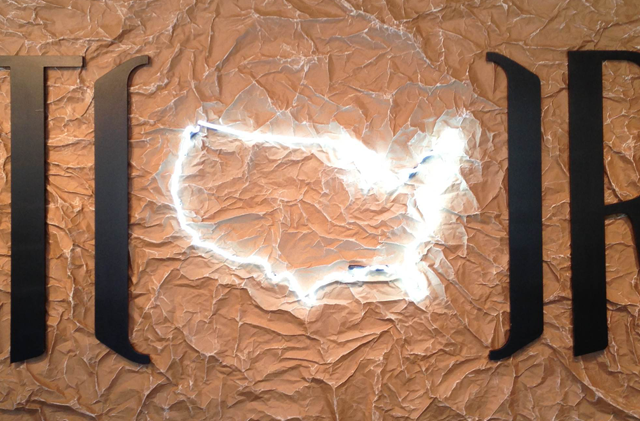 Joins forces with Cigna, a leading global health service company to explore the things we can do every day to “Feel Good,” from prevention (Good Plan), and nutrition (Good Eats), to mindfulness (Good Vibes). 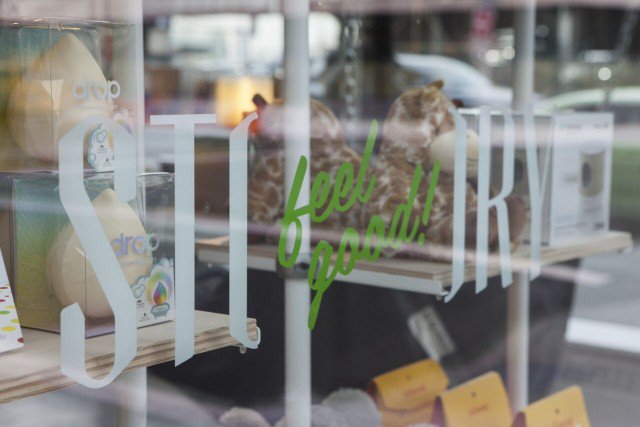 aking a look at what it actually means to disrupt the status quo by joining forces with USA’s award-winning series MR.ROBOT. 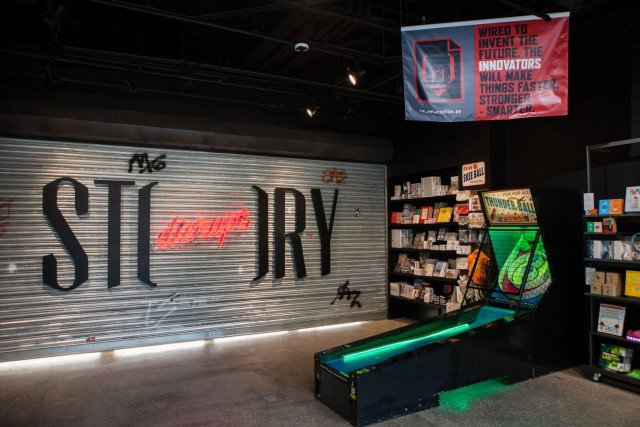 The current STORY, opened June 6th to July 24th, is themed ST{ Disrupt }RY. STORY partnered with MR. ROBOT for their Season Two premiere. While in Manhattan for the 4th of July, I was able to visit this story in person and found a bare bones design for the exhibit to resemble the grimy, old arcade where the super hacker groups would meet in the show. I had originally expected it to be a bit fancier, but given then theme, it made sense the way they designed it.

With a concept that plays matchmaker between brands and consumers, a place where marketing, merchandising, and business development strategies converge all at once, STORY’s approach adds value to all the stakeholders involved in creating the experience. During their ST{ Making Things }RY, Beth Comstock, CMO of GE, described the experience from her company’s perspective, “There is a huge value for brands in having a place where you can experiment, and have a lab that actually creates a profit and a recurring revenue stream, and gives people a good experience.” STORY has truly developed an innovative approach within the pop-up shop concept. 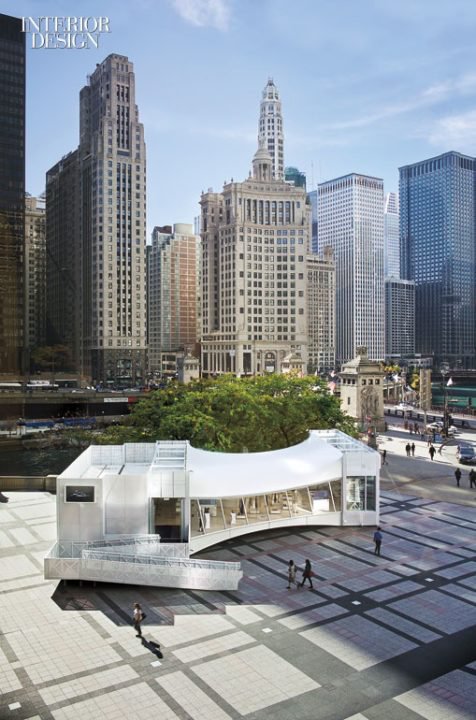 Another completely different pop-up approach is called ShopWithMe. This new concept was launched in 2016 and has already begun to create buzz for its innovative approach to design and location. ShopWithMe shops are not fixed to a geographical place or even a particular brand. From a design perspective, the approach to creating a space is unique, in that modular units can be rearranged and exchanged for different brands. The result is a high-end environment that feels intentional and customized, which is incredible given that each shop is put up in such a short period of time. Each shop feels really modern and fresh and has a unique aesthetic point-of-view. 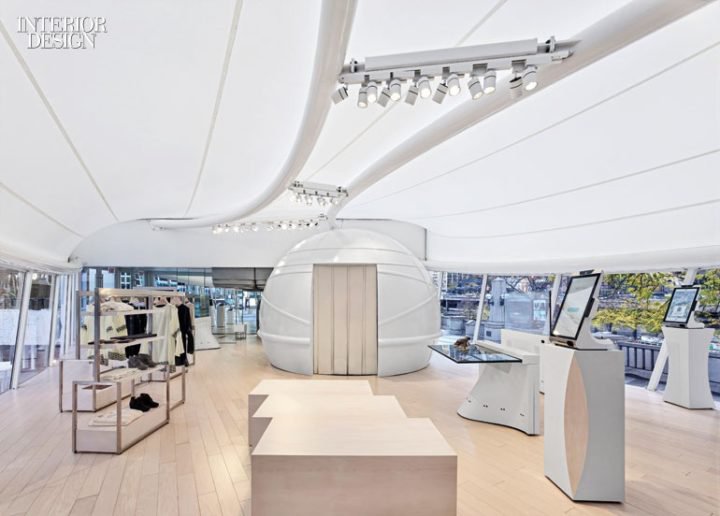 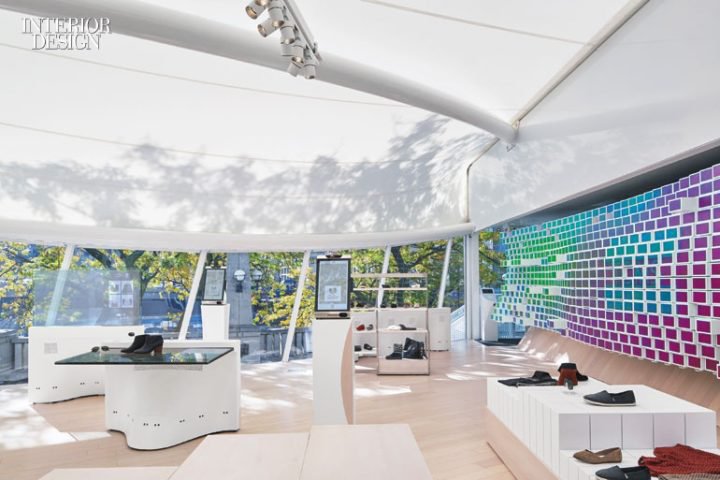 The principle of ShopWithMe is to “Change the files, not the fixtures,” according to Giorgio Borruso, creator of ShopWithMe. He says, “I’ve long been fascinated by how the reality of a 3D place and 2D interface collide. This project is a seamless melding of physical and virtual worlds.” This approach fascinates as it integrates some of the coolest technologies across each of the shops. 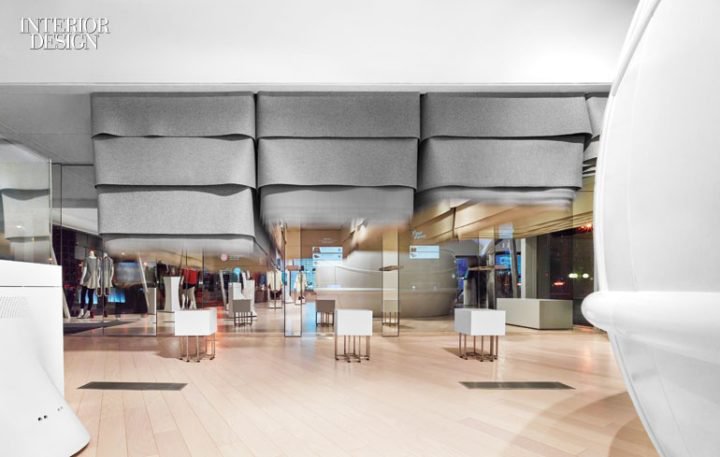 Among the different technologies, the dressing rooms are the most inspired in how they function within the design of the space, dropping down only when needed. This super efficient use of space doesn’t take up square footage in the retail environment, but allows for private space as needed. This brilliant design solution has dressing rooms tucked away for space-saving, but full privacy on demand. Where STORY has focused on the idea of storytelling through it’s themes in a unique approach, ShopWithMe uses technology and design to create a unique, customizable space that separates itself from the pack. 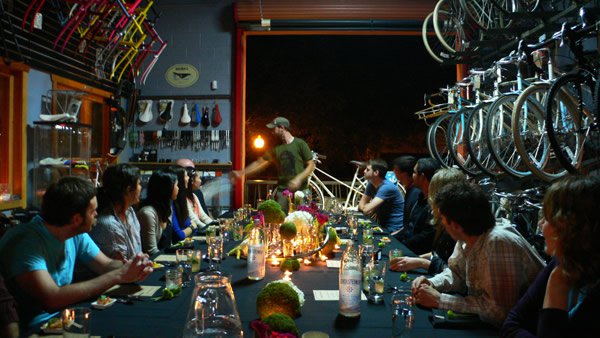 Outside of retail, another industry benefiting from the trending pop-up shop approach in a big way is the food & beverage industry. Food trucks anyone? Evolving past the food truck-craze, ‘secret dining clubs’ are taking the pop-up concept one step further. Eventbrite, a self-servicing ticket platform, has seen the fastest growing trend in the pop-up dining experience, with 82% growth in 2015. With this approach, the restaurant is born that morning and then by that evening, it’s gone. 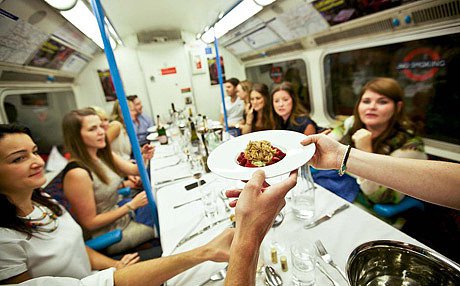 Secret dining clubs capitalize on chefs creating curated, new experiences that are only available for 24 hours. Guests who attend these events are looking for something different in a dining experience, a unique menu or theme. So intriguing locations are selected within a city that are unexpected, fresh and new. By the end of the evening, diners have a one-of-a-kind shared experience. Playing up the unique aspects, secret dining clubs use rare ingredients, unexpected venues, exclusivity, or personal chef interaction as key experiences for diners.

With ShopWithMe, the pop-up concept really thrives off of technology in the shops to customize the experience for shoppers. Whereas with STORY, high-tech experiences are not the central focus, but rather a physical brick-and-mortar store focused around a theme. STORY has taken the pop-up shop concept within a permanent, physical space and incorporate an overarching theme, through the idea of powerful storytelling. ‘Secret dining clubs’ don’t use high-tech experiences or a unique storytelling approach; the pop-up is solely focused on the exclusivity and ‘gone in the dark of night’ experience built around each event. All of these are distinct approaches within the pop-up concept, but all of these pop-ups are successful in accomplishing the goal of grabbing their target audience’s attention and delivering on that desired experience.

Consumers today are known for their short attention spans, so brands often struggle to capture and keep consumers’ engaged for long. Consumers today are authentic, personalized, innovative, interactive, mobile and curious, and they want these attributes in their brand interactions and experiences. Pop-up shops have answered the call, tailoring experiences through design and innovation.

“Pop-up shops have answered the call, tailoring experiences through design and innovation.”

The evolution in design, combined with brand storytelling, customization, exclusivity and temporal excitement, have driven unique experiences to pique interest in the ever-demanding consumer marketplace. So what is next in innovation for pop-up shops? There is always a need for a really small footprint solution for most brands for whom space is at a premium. How can we do a bite-sized version of the pop-up prototypes? As designers, we know there are many business opportunities that can be solved through design innovations. We just have to think outside of the box … maybe even literally.

What do you think about these evolving designs of temporary shops? Use #popupshops and let us know your thoughts.